Going With the Ant Squad

This fall, I  had indoor recess duty (usually a dreaded duty) with a first grade class.  I noticed that many of them busily working on (some might say obsessed with) some ants that had been seen in the classroom.  They had formed an ant squad to handle the problem.  They were drawing plans, looking around the room, and designing paper constructions to handle the ants.

Now, I had a few choices here.  I could tell them not to worry about the ants and assign them some other activity.  I could take the “ants are people too” approach and urge/require them not to interfere with the ants.  I could ignore the kids and let them continue their ant squad unimpeded by adult action.

I decided not to take the usual adult approaches. I decided to really take time to really find out more about the ant squad.    The kids were very excited that I was going to join the ant squad and gave me some assignments. I filled an empty spray bottle with some water and gave it to them as an ant spray (knowing it would not hurt anything). They sprayed the ant locations using the bottle.   I checked out their drawings and plans and made and shared some of my own.

A student came down to the tech lab later in the week and excitedly shared his ant squad plan with me.  (See below.)  I was reminded of this recently when the same boy told me they had changed the ant squad to the white caterpillar squad at outdoor recess.  (Kids have been very afraid of these white caterpillars that some kid are allergic to and adults have warned them about.)  I was happy that I had decided to join,  get a little glimpse of, and become a part of  the kids’ world. 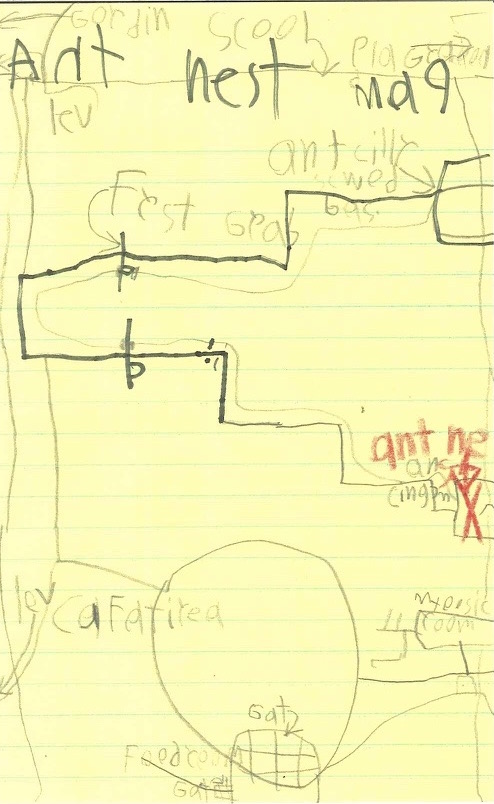 This entry was posted in Child Development, Teaching. Bookmark the permalink.